My Results of 30 Days Without Coffee 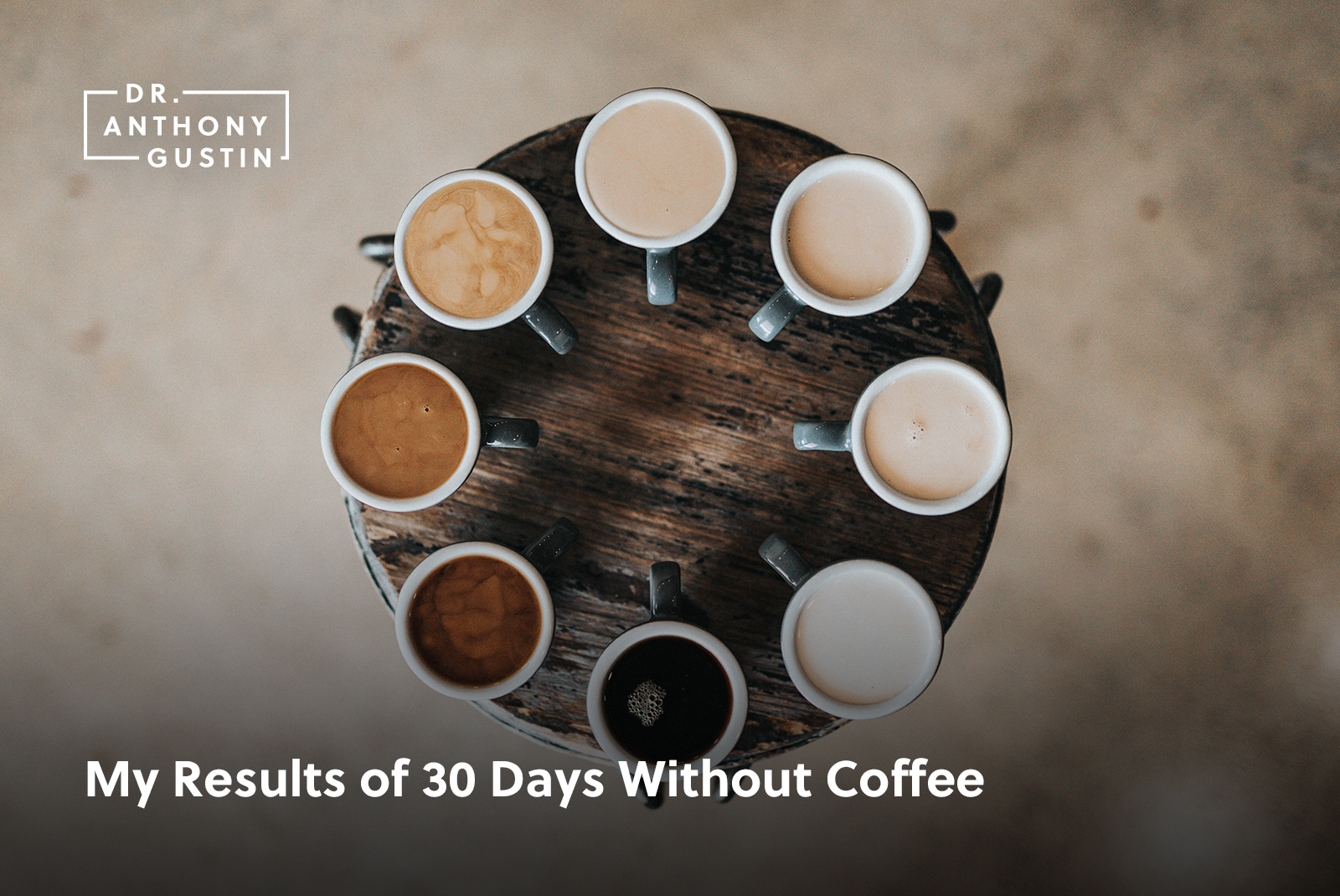 Lightspeed travel. Immortality. Drinking a gallon of milk in 30 minutes. These are things that are all seemingly impossible, or at least unable to be achieved in my lifetime. I have new hope. I just conquered an item on this list of impossible feats and have lived to tell my story. I went without coffee for 30 days.

I know you think that I’m crazy for doing this as well as a hero for accomplishing it, but I’m here to tell you it’s possible. Below are the reasons why I decided to take this challenge on, the results, and everything I’ve learned.

In high school, I hustled the same way I do now and had several jobs. One of them was as a barista whipping up drinks for basic midwestern moms. This is where my coffee obsession started. It wasn’t until recently that I realized I’ve had coffee almost every single day since these formative teen years.

This never came as a reliance on coffee/caffeine as a drug. Coffee consumption hasn’t ever benefitted me as a stimulant like it does for others. Through testing services like 23andMe, I’ve discovered that I am on the far end of (slow) caffeine metabolism. This means that I can drink a triple espresso before bed and not have any problems sleeping.

There has been no crutch. I’ve just loved coffee more than any other liquid (even more than mezcal). I love the attention to details. I enjoy subtlety. I enjoy intentionally crafted goods. This is why I love things like coffee. The variations and care it takes to grow, harvest, roast, and brew the beans can lead to an infinite level of refinement and variation. This is also why I love mezcal. Neat.

Coffee also brings people together. Seeking out third wave coffee shops in cities I travel to is an amazing way to immediately connect with creative people who care about something in the city I’m visiting. Tokyo, Chiang Mai, Paris, New York, Sydney, and more all come alive to me when I find curated grocery stores, unique restaurants, and original coffee shops.

Let’s not forget, coffee is just plain delicious. Try to tell me of something more satisfying than a Kyoto cold brew or an expertly pulled espresso shot. You’ll probably tell me some sort of mezcal, which would be a fair point. Nothing else is possible though.

So why change anything? If you’ve read any of my other articles, you should know by now that I’m a firm believer that you should always be testing your own assumptions, no matter how normal you think they should be.

When assessing my personal behaviors, I realized that I had been consuming at least two double espressos and a cold brew a day for as long as I could remember and honestly didn’t know what life without coffee was like. Maybe things have gotten a little out of control with coffee.

I don’t think coffee is inherently unhealthy, in fact, there is a lot of evidence to the contrary, but I’m always looking to challenge my own beliefs in my life. This quest has led me to realize that fasting is actually not hard and makes me feel amazing. It also taught me that I was eating way too much damn protein. Maybe my coffee consumption was having unintended consequences and I just wasn’t aware of them.

No coffee for a month was the prescription. Here are my findings.

To not completely go cold turkey, I replaced my copious amount of coffee with one fatty matcha shake per morning. This was about 1/10th the amount of caffeine I was typically drinking and was still extremely delicious, but not the same.

As I mentioned earlier, my caffeine metabolism has always been on the very far end of the spectrum. I’ve never gotten the crazy amount of energy or focus that other people had reported with caffeine consumption. Or so I thought.

There certainly was a moderate level of sluggishness for the first week or so with taking my caffeine level down significantly. This came mostly in the mornings where instead of feeling like I’m going to crush everything in front of me as soon as I woke up, it took a few hours to get going.

To combat this I just shifted my routine a little bit. I worked out in the morning, took it slow, read, and did other activities that didn’t require mental intensity.

Another interesting note is the routine shift. When you change any routine, you’re going to have a little bit of shock to the system. Taking out my zombie mode automatic espresso shot pulls was tougher than actually the toughest transition part. That’s when I wanted coffee the most, when it was part of a routine that I was no longer taking part in. The mornings were tough for that reason as well as the endless (read: pointless) coffee meetings that being an entrepreneur in San Francisco brings.

Other than the moderate sluggishness in the first week and some variation in ironclad routines, there really weren’t any other observable differences in the beginning. After the two week mark, there seemed to be a bit of a phase shift of sorts.

About two weeks in, I noticed that I felt extremely tired and sluggish in the afternoon one day. I had to ask myself what the hell was going on? Do I have a life-threatening disease? What is happening here?! Well, when I thought about it further, I had stayed up until 2 am the night before researching about cryptocurrency and blockchain technologies.

Without coffee and only four hours of sleep, my body was actually sending me signals.

“Hey dummy, you should sleep more, and now could be a good time for that.”

So this is what being tired is supposed to feel like. Okay. That makes a lot of sense.

A huge realization came that I wasn’t able to have any clarity of the signals of tiredness for as long as I could remember. I slept fine at night, but throughout the day I wasn’t able to actually notice if I needed to just rest and not push through the intensity of work so hard.

Coffee had certainly been pulling the shades over the signals that my body was trying to tell me.

Overworking has been one of my personal struggles of the last few years. It has been pretty easy for me to burn hot and fast even with supporting my body with sleep, meditation, proper nutrition and movement. If I didn’t have everything pretty tightly covered with my health I’d be even more of a mess than I already am.

Removing excessive caffeine intake taught me within two weeks that it’s not possible to listen to the daily signals that my body is trying to tell me. This was the largest wake-up call and one that I hadn’t even considered.

Resting when you’re tired is generally good thing for sustainability in anything you want to do. Who would’ve thought? Being able to tell when you’re actually tired is the key part of this though. Thanks, body.

Also around the two-week mark, barring sufficient sleep, energy levels were much more stable throughout the day. Instead of such a crazy amount of intensity in the morning hours and needing a break as I entered the afternoon, I felt like I could go at a more reasonable pace throughout the entire day.

Energy would be stable and high, and then at the end of the day, I was tired but not in an “I’m going to pass out if I don’t get into my bed right now” tired. This again seems like a much more sustainable approach to most days.

After about three weeks, I feel like I could tell with much more clarity when I’d be thirsty. I think thirst before was either unnoticed or disguised as hunger. Chalk it up as another signal I wasn’t receiving from my body.

Most people report a change when removing coffee and caffeine from their life. I feel like because I’ve had so many other facets of my life dialed in and because it takes my body forever to process caffeine that this really didn’t have an impact on me.

Sleep was the same 8-9 hours, without an alarm, as I would typically get. Restfulness upon waking and falling asleep were the same as before. This is a testament more towards how nutrition, stress management, routine, and living like a real human can regulate and optimize sleep.

From what I can tell, the amount of coffee and caffeine I was consuming wasn’t allowing my body to get the appropriate signals through to my brain. Living an always-on lifestyle, the last thing I need is an excessive amount of stimulants confusing signs and signals of normal body function and regulation.

It has now been a little over a month or so and I’ve incorporated coffee back in gradually, but not even close to the same extent as I used to. I’m at about 1-2 coffee drinks per day (usually just a single espresso shot or cold brew), 3-4 days a week. This comes mostly out of enjoyment and not out of a compulsion and routine.

The rest of the time I’m having nothing or matcha tea made in various ways. This experiment also actually prompted me to release a matcha product through my keto company. I’m biased, but I think it’s pretty freaking amazing.

Consuming caffeine this way allows me to still enjoy the deliciousness and craft with still hearing what my body is trying to tell me. This seems like the sweet spot for me. I’m going to consume coffee on this regular cadence, but not feel like I’m going to tear someone’s arms off if I can’t get three shots of espresso and a cold brew within an hour of waking up from now on.

I’m certainly not concluding that coffee is unhealthy, or can’t be part of a normal daily routine. There are tons of phytonutrients and benefits of coffee. It is amazing. I’m saying that with my current intense lifestyle, I was putting way too many stimulants into my body trying to achieve a certain result. No one needs the equivalent of 4-6 coffee drinks in a day.

Now it’s your turn. When is the last time you’ve gone without caffeine for days at a time? My challenge to you is going 30 days and see what you notice. There may be no difference, but there may be some things you learn. You’re an individual and the only way you’ll figure out your own health is by testing. So get after it.