Going From Vegetarian to Keto to High-Protein Carnivore A lot of people have cravings for things and snack a lot because their protein needs are actually not being met through their meals throughout the day. Click To Tweet 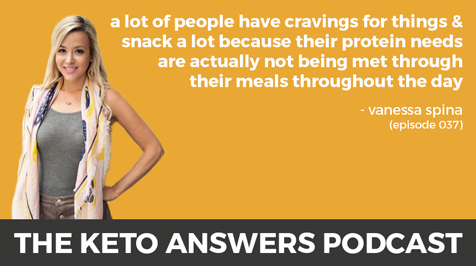 She actually spent most of her life as a vegetarian.

So what changed for her?

After struggling with weight gain, low energy, and just feeling generally unwell, she decided to cut both gluten and sugar from her diet and added in fish and eggs.

She immediately started to feel better and wondered what else she could do to optimize her health.

This led her to try intermittent fasting and the ketogenic diet from a pescatarian approach.

But, despite eating what she thought was a clean keto diet, she gained over 20 lbs when her initial goal was to lose weight.

It didn’t take long for her to realize she was making two common keto mistakes and, once she fixed them, she started to feel better and her weight moved in the opposite direction.

There’s something that happens as you start to eat more real foods, and so it becomes this gradual thing that becomes easier and easier to do. Click To Tweet

Fast forward even further and now Vanessa’s on a high-protein carnivore diet and has never felt better.

That’s why, in this podcast episode, she shares her journey from vegetarian to carnivore and everything she’s learned in between, including the biggest areas she’s struggled with.

Vanessa also puts the protein myth to rest and shows you how an increase in protein really affects ketosis and what it did for her.

As a best selling keto cookbook author who has over 300k Facebook and 100k Instagram followers, Vanessa’s made it her mission to help other people use the ketogenic diet as a way to heal their bodies and turn on the switch to burn fat for fuel.

To help you do just that, Vanessa and I chatted about these topics: