The Ketogenic Diet vs. The Carnivore Diet and Rediscovering Nutrition on the Road to Sobriety and Health 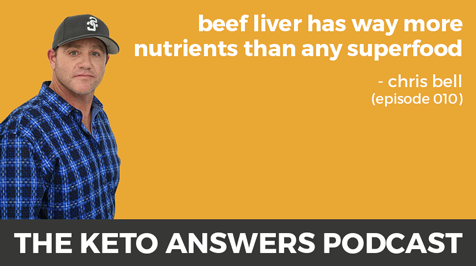 In the early 1990s, low-fat diets were all the rage. Health institutions recommended trading in fatty foods for “heart-healthy” carbs, and most people did.

Despite this low-fat dogma, Chris Bell, today’s guest, went down a different path.

Chris is a renowned filmmaker who’s directed and produced the health documentaries Bigger, Stronger, Faster*, Prescription Thugs, and Trophy Kids, and he started experimenting with the ketogenic and carnivore diet years before the low carb movement became mainstream.

In 1994, he began to eat nothing but meat and water. That’s right, he jumped into the carnivore diet before it was cool.

At the time, Chris was a powerlifter and going carnivore accelerated his weight loss dramatically. In just 3 months, he went from 245 to 198 pounds.

After seeing these results, he turned to a ketogenic diet, which he followed throughout his long career in the fitness and film industries.

However, his nutrition and overall health took a bad turn when he started to struggle with alcohol and drug addiction.

After filming a 2015 documentary about the effects of prescription drug abuse, he decided it was time to get clean.

Getting sober prompted Chris to reevaluate his relationship with food, dive into nutritional science, and challenge the mainstream nutrition advice.

To his surprise, he found a lot of what we’re told about food and nutrition is just plain wrong.

You probably don’t need that many carbs and plants.

You are most likely missing out on a big superfood (hint: it’s an organ).

Chris is now back into the carnivore diet, and in today’s episode he tells us all about his results, how it compares to a keto diet, and what he learned during and after getting sober.